Photocatalytic water treatment uses ultraviolet (UV) irradiation of semiconductor particles to generate reactive charge carriers capable of degrading a wide range of aqueous pollutants via heterogenous reaction in suspension. This project seeks to optimize a novel per- and polyfluoroalkyl substance (PFAS)-active catalyst material and reactor design in order to greatly increase the energy efficiency of the system. This effort is being conducted in two phases.

Phase I of this effort focused on demonstrating the PFAS destruction capabilities of a novel Bi3O(OH)(PO4)2 (BOHP) microparticle catalyst, followed by testing its application to treatment of investigation-derived wastewater (IDW) within a preexisting commercial photocatalytic reactor system. Promising degradation of perfluorocarboxylic acids (PFCAs) and other PFAS was observed; however, it was concluded that the commercial system relied too heavily on vacuum ultraviolet (VUV)-induced photolysis and did not efficiently leverage the photocatalyst. Both material modifications to the catalyst and engineering modifications to the reactor configuration were isolated as promising routes to improve the energy efficiency of PFAS treatment. The results of the Phase I effort are available in the Phase I Final Report.

The objectives for the Phase II effort are as follows: 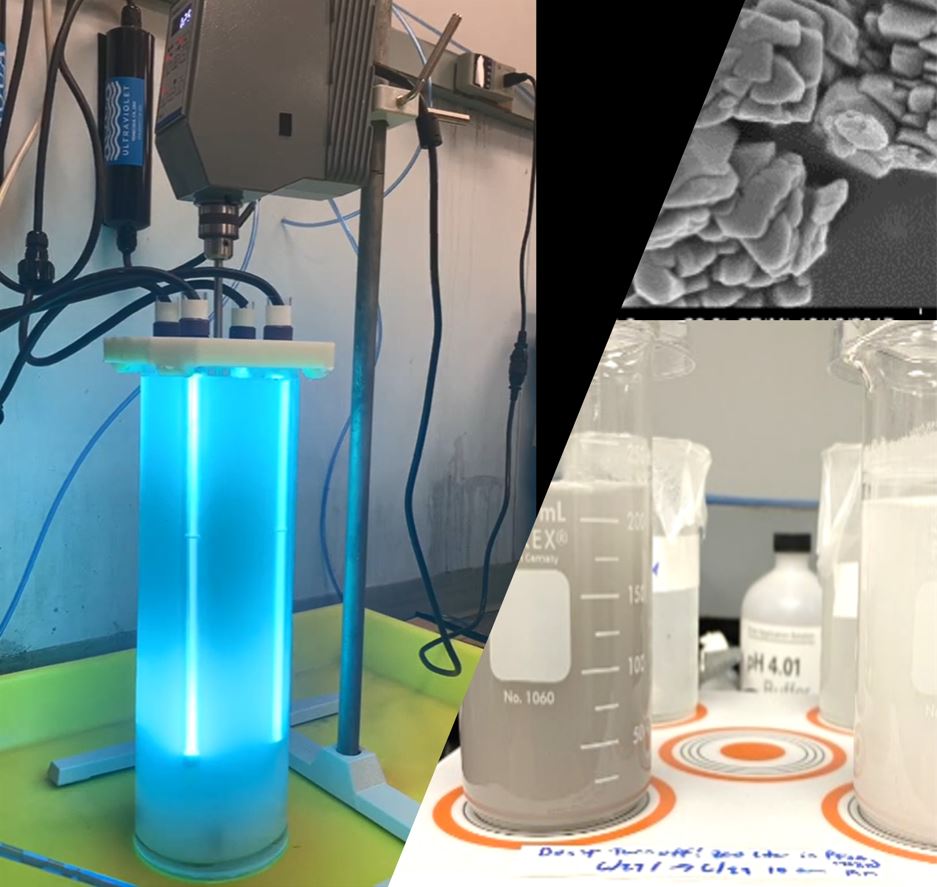 Surface area will be enhanced via surfactant modification of the hydrothermal synthesis procedure for controlled crystal growth. Additionally, the bulk composition of BOHP will be strategically modified with dopants that are known to improve charge carrier separation and catalytic activity, and incorporation of co-catalyst heterojunctions will be explored. Photocatalytic activity toward both long- and short-chain PFCA degradation will be assessed to reflect improvements. Ultimately, 1-2 catalyst embodiments showing the greatest efficacy will be selected for use in subsequent reactor process behavior studies to determine the response to complex water matrices.

To enhance overall system efficiency, numerous batch UV photoreactor modules with axial impellers will be constructed with varying vessel dimensions to determine optimal configuration for efficient utilization of both UVC and VUV mercury lamp emissions. Vessel size, lamp spacing, catalyst concentration, and impeller speed will be adjusted during the optimization, and the electrical energy per order of reduction (EE/O) for perfluorooctanoic acid (PFOA) and perfluorobutanoic acid (PFBA) will be tracked. A larger reactor optimized for the photocatalytic effect is expected to degrade PFOA most efficiently, while a smaller reactor that maximizes direct photolysis is expected to be more effective for short-chain PFCAs; thus, a sequential treatment scheme for degrading a wide range of PFAS may emerge from this work.

To confirm applicability, IDW from two Department of Defense (DoD) sites will be treated in the prototype batch system and analyzed for 24 PFAS as well as fluoride. The cost of full-scale treatment will be estimated based on the kinetics observed in batch experiments using a tanks-in-series model, and catalyst stability over 5 days of continuous operation will be evaluated by tracking PFOA degradation activity.

In the prepared water tests with the pilot system in Phase I, BOHP/UV achieved >95% reduction of GenX and all PFCA parent compounds in under 20 minutes of irradiation time; however, treatment kinetics were slower than expected based on successful bench test results. Unlike degradation, mineralization rates correlated positively to chain length. In bench tests, co-present Cl– and SO42– were shown to slow PFOA degradation significantly, while natural organic matter had negligible impact on performance. Groundwater IDW showed successful removal of PFAS, though scale-up analysis showed that catalyst performance should be improved for adequate cost-viability. After 191 hours of use in the pilot system, the single batch of BOHP showed no detectable decrease in catalytic activity, indicating robust operation. Proof-of-concept experiments for reductive degradation of PFOS were successful using BiPO4 with methanol as an electron acceptor.

The BOHP/UV process has already been demonstrated to be a relatively energy-efficient PFOA degradation technology. Furthermore, since it is a recently discovered photocatalytic material, ample opportunity exists for improving its effectiveness using compositional modifications that have proven effective for similar materials in the past. Any fundamental improvements in the catalyst will lead to greater PFAS treatment efficiency of the overall method. The evaluation of commercial photocatalytic systems has led to new design concepts tailored toward deployable systems for IDW treatment, and the prototype optimization tasks are designed to quickly pinpoint a specific energy-efficient embodiment that is suitable for scale-up.