In most cases when a munitions response site is cleaned up using traditional methods, it is mapped with a geophysical sensor and the locations of all detectable signals are excavated. Geophysical sensors detect metal, and therefore, many of the detections do not correspond to munitions, but rather to harmless metallic objects or geology. Field experience indicates that often more than 90 percent of objects are found to be nonhazardous. Traditional technology does not provide a physics-based, quantitative, validated means to discriminate between hazardous munitions and nonhazardous items. As a result, most of the costs to remediate a munitions-contaminated site using traditional methods are spent on excavating targets that pose no threat.

The Munitions Response focus area is severely constrained by available resources. Remediation of the entire inventory using traditional practices would have been cost prohibitive within current and anticipated funding levels. Estimated completion dates for munitions response on many sites are decades out. If successful classification of munitions from harmless debris were implemented, substantial cost savings could be realized and available resources could be used to accelerate munitions response on sites that, at present, are forecast to be untouched for decades.

Classification is a process used to make a decision about the likely origin of a signal. In the case of munitions response, high-quality geophysical data can be interpreted with physics-based models to estimate parameters that may be useful for classification. The parameters in these models are related to the physical attributes of the object that resulted in the signal, such as its physical size and aspect ratio. The values of these parameters may then be used to estimate the likelihood that the signal arose from an item of interest—that is, a munition. 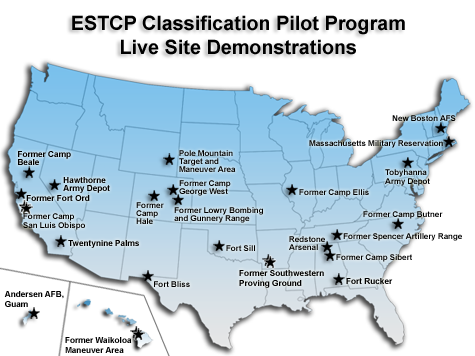 SERDP and ESTCP have been pursuing two approaches to classification. The first is to maximize the performance possible with commercially available, industry standard geophysical sensors. Carefully collected data can be analyzed to extract a limited amount of information about the detected target to support a decision about whether it is likely to be a munition. Beyond commercial technology, however, purpose built sensors provide substantially more information to better characterize detected objects. Advanced sensors that emerged from research to field include the MetalMapper, TEMTADS and Berkeley UXO Discriminator (BUD). To fully realize their value, new methods have been developed to visualize and efficiently analyze the survey data.

ESTCP initiated a Classification Pilot Program in 2007 to validate the application of a number of recently developed technologies in a comprehensive approach to munitions response. The goal of the program was to demonstrate that classification decisions can be made using an explicit approach, based on principled physics-based analysis that is transparent and reproducible. As such, the objectives of the pilot program were to:

Successful calcification has been demonstrated at a number of live sites in conjunction with ongoing remediation efforts or before scheduled work has begun. The demonstrations explored a wide range of site conditions, including a mix of munitions types, vegetation, and terrain, while seeking to develop implementation strategies in conjunction with site stakeholders. As the pilot program progressed, research firm participation was reduced and production-firm participation increased to facilitate transfer of the technologies to the munitions response community. More information on each site and its demonstrators can be found below.